Accrete is proud to welcome Retired Four-Star General Stanley A. McChrystal to the Accrete Advisory Board 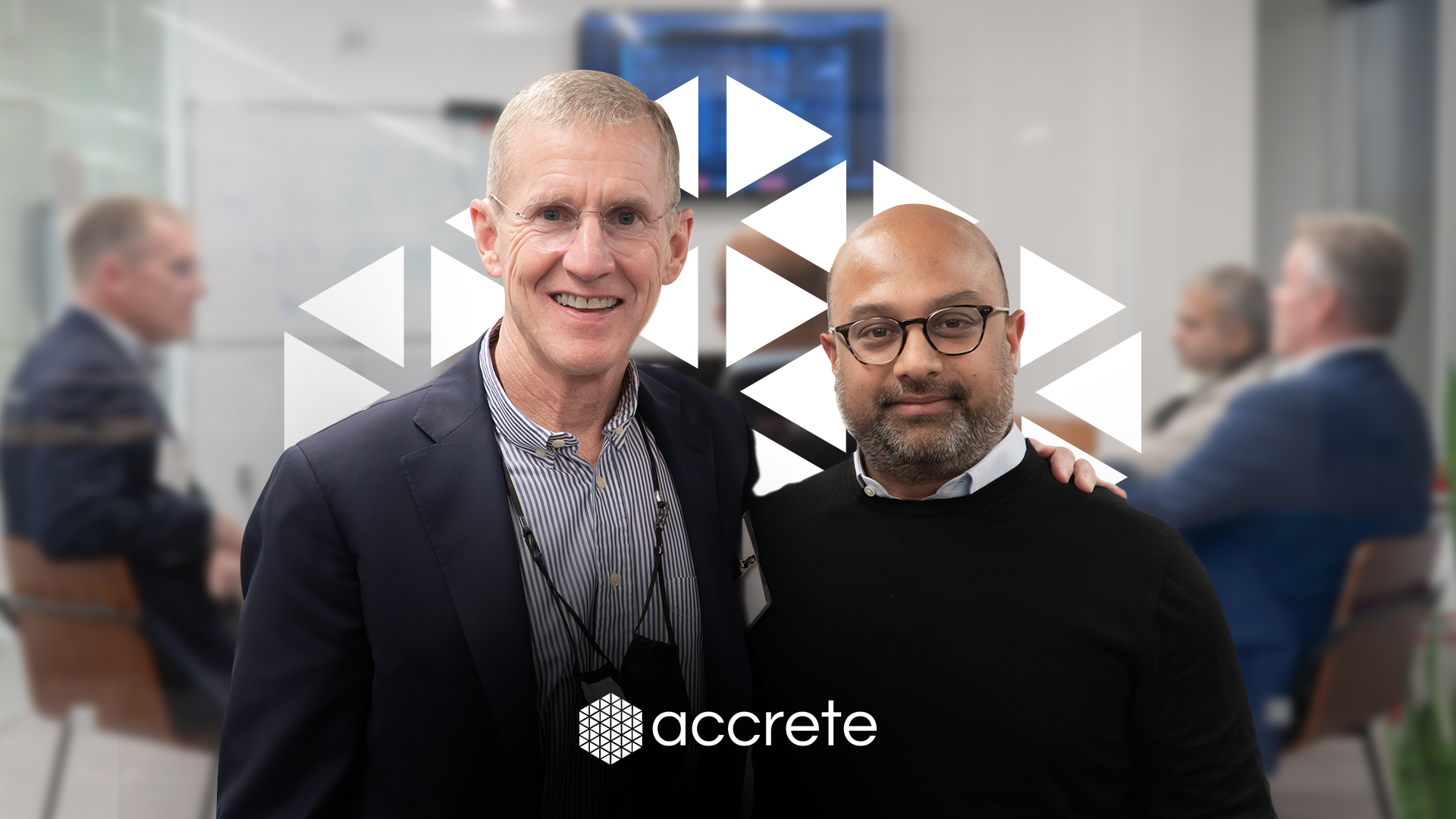 Throughout his military career, McChrystal commanded a number of elite organizations, including the 75th Ranger Regiment. After 9/11, until his retirement in 2010, he spent more than six years deployed to combat in various leadership positions. In June 2009, the President of the United States and the Secretary General of NATO appointed him as the Commander of US Forces Afghanistan and NATO ISAF. His command included more than 150,000 troops from 45 allied countries.

McChrystal and Prashant Bhuyan, Co-Founder, CEO, and Chairman of Accrete, Inc. developed a friendship many years ago centered on Stan’s work in the area of leadership. McChrystal’s leadership principles, captured in his book Team of Teams: New Rules of Engagement for a Complex World, are based on the idea of breaking down preconceived notions of leadership in order to increase competitiveness through the development of agile, efficient, and mission-oriented organizations. For example, charisma and omnipotence are not leadership; great leaders are empathetic, fallible, and walk a fine line between confidence and humility. Most importantly, McChrystal believes anyone can step up and lead, as leadership is a choice.

“General McChrystal has been a great friend and mentor since we launched Accrete in 2017,” said Bhuyan. “Thanks largely to the ‘Team of Teams’ mentality that’s infused into Accrete’s culture, we have been able to create substantial operational leverage, outperform much larger competitors, and build impactful products. In fact, Accrete has been rapidly evolving into a market leader for configurable, continuously learning dual-use AI solutions that perform meaningful analytical work for both government and commercial customers. Our threat detection solution Argus™, for example, continuously analyzes the open-source web, in multiple languages, to predict anomalous and nefarious behavior hidden in plain sight. Not only does Argus perform work that would otherwise require an army of expert analysts to perform at an estimated cost of hundreds of millions of dollars, the insights produced help combat bad actors that could cost the economy billions of dollars.”

“If we don’t compete in artificial intelligence, we lose.”

Speaking at the Accrete headquarters in 2021 before a crowd of AI experts and U.S. Special Operations veterans, McChrystal didn’t mince words when he rang alarm bells about how foreign adversaries have been weaponizing information complexity and misinformation to attack U.S. civil society. Calling out that the U.S. is now in an information and AI war with China, he warned that if we don’t compete in AI, “we lose.” McChrystal said, “Economic and geographic advantages of the past aren’t enough to protect the U.S. in this new era of conflict.” He added, “The work Accrete is doing to bolster national security is critical to increasing competitiveness and winning.”

Bill Wall, a former Special Forces Lieutenant Colonel that spent twenty-two years in service who leads Federal Sales at Accrete said, “Having worked for General McChrystal for five years while in the Joint Special Operations Command, I’ve seen firsthand the amazingly positive impact his style of leadership and influence make on organizations. General McChrystal knows how to mentor leaders into pursuing a bold vision to achieve transformational change that produces high-level results. Even the very best teams are made better when he is involved. I am excited to have him on our advisory board as we prepare for sustained growth and increased capability for our government and commercial customers in 2023 and beyond.”

Jason Kirby, Accrete’s Federal Sales COO, said, “It is our privilege to have General McChrystal join our advisory board as Accrete continues to scale as a DoD prime contractor. Having served with General McChrystal at the Joint Staff during a critical juncture in our nation's national security, it is Accrete's privilege to once again support the warfighter with revolutionary artificial intelligence capabilities that empower our nation's defense. General McChrystal's renowned leadership and intellect is a welcome addition to our growing team.”

About General Stanley A. McChrystal

Following military service, Stan spent twelve years as a senior fellow at Yale University’s Jackson Institute for Global Affairs, where he taught a course on Leadership. He also sat on the boards of Navistar International Corporation, Siemens Government Technology, and JetBlue Airways, and is currently on the board of FiscalNote and advises several other firms. He is a sought-after speaker, giving speeches on leadership to organizations around the country. In 2013, Stan published his memoir, My Share of the Task, a New York Times bestseller; and is the author of Team of Teams: New Rules of Engagement for a Complex World, a New York Times bestseller in 2015. Stan also co-authored Leaders: Myth and Reality, a Wall Street Journal Bestseller based on the epochal Parallel Lives by Plutarch.

A passionate advocate for national service and veterans’ issues, Stan is the Chair of the Board of Service Year Alliance. In this capacity, he advocates for a future in which a year of full-time service—a service year—is a common expectation and opportunity for all young Americans. Stan is a graduate of the United States Military Academy at West Point and the Naval War College. He also completed year-long fellowships at Harvard’s John F. Kennedy School of Government and the Council on Foreign Relations.